From dramatic surf scenes to cars diving off the cliffside of Mori Point, Pacifica has set the stage for many suspenseful moments on the silver screen. 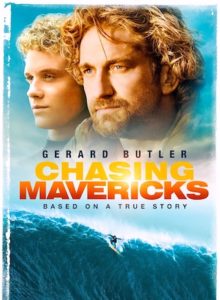 Of course, anyone at all familiar with the surf culture of Pacifica and its neighboring beach communities remembers Chasing Mavericks, which made its screen debut in 2012. Starring Gerard Butler as Frosty Hesson and Johnny Weston who plays Jay Moriarity, this inspirational, true story depicts surfing legend Moriarity as a 15-year-old who discovers the mythic Mavericks surf break, one of the biggest waves on Earth, just miles from his Santa Cruz home, outside the north end of Pillar Point Harbor and ten miles south of Pacifica. The two Pacifica locations featured in the film were the south end of Linda Mar Beach and at Oceana High School. In the movie and true to life, Moriarity enlists the help of local legend Frosty Hesson to help train him. As Jay and Frosty embark on their quest to accomplish the impossible, they form a unique friendship that transforms both their lives and their quest to tame Mavericks becomes about far more than surfing. 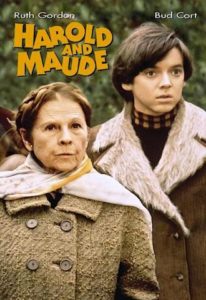 award-winning stage and film actress Ruth Gordon and her Harold and Maude screen companion engage in a series of bemusing suicide “attempts.” The crescendo is when Harold makes the leap off Mori Point in a black jaguar in one of the final scenes of this classic comedy. This car eventually went on tour and was twice seen in Pacifica’s Fog Fest parade. While the majority of the film is shot in and around San Francisco, the Pacifica scene strikes a very dramatic blow. The basic storyline is about the young adult Harold Chasen who is solitary and friendless by choice and is obsessed with death. His attempt at attracting the attention of his wealthy mother manifests itself in staging a series of his own fake suicides. It is at a series of funerals that Harold meets Maude, on the cusp of her eightieth birthday, she who also attends funerals of strangers. Unlike Harold, Maude is obsessed with life – her own life to be more precise – she does whatever she wants to please herself, damned what others may think or how they may be affected. 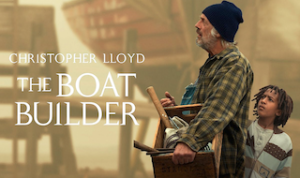 Then, there’s the more recent The Boat Builder, released in 2017, starring Christopher Lloyd as a bitter old hermit known around town as Captain Crazy who reluctantly agrees to help a young orphan avoid the local bullies so long as he agrees to help him finish his half-built boat. The two gradually forge an unlikely bond and the boat becomes their one chance to escape from the seaside village that harbors their troubles. With scenes shot along Dondee Way in Rockaway Beach and in private residences on Pedro Point, the Boat Builder tells the story of retired Merchant Marine Captain Abner, played by Lloyd, who is in his seventies and wants to complete the frame on his sailboat and head across the Pacific. Along the way, Abner ends up befriending a 10-year-old kid, played by newcomer Tekola Cornetet, who has traveled through way too many foster homes. Abner’s daughter (played by television veteran Jane Kaczmarek) would prefer her father move into the “safety” of a home for senior citizens and many of the townsfolk agree. This is a story of the importance of dreams at every age. Originally slated to shoot in Los Angeles, the film moved to the Bay Area as the result of a cast change. While Alameda and Sausalito also served as locations, Pacifica shined as the home of the movie. 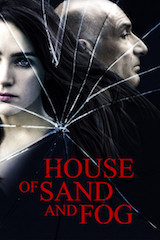 Then, there’s the House of Sand and Fog, released in 2003. With many scenes shot in Pacifica the movie is about an emotionally broken woman, Kathy, who suddenly finds herself homeless after her house is wrongly repossessed and auctioned. Seeking respite from his marriage, Lester, a sympathetic sheriff’s deputy comes to the aid of Kathy and becomes intimately involved in her situation. Soon, Behrani, a proud emigrant Iranian and his family move into the house only to find their new lives burdened by harassment from Lester and Kathy as they attempt to reclaim her former home. The once prosperous colonel denies Kathy’s pleas for he knows his recent purchase promises a profitable return and a better future for his adolescent son and his wife. But latent consequences lie beneath Behrani’s well intentioned plan as Kathy’s emotions spiral out of control and her actions spark a tragic chain of events that will leave no resident unscathed in the House of Sand and Fog.

Pacifica has been home to many other films as well, including Savages (2012); Blood Brothers (2017); Street People (1976); and My Neighbor’s Daughter (1998). Can you add any others to the list? Let us know which Pacifica featured films are your favorite.