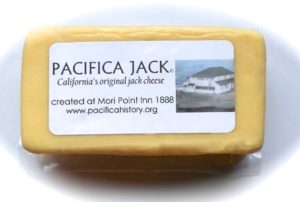 "Cheesegate," he cried as he poured through the last words of Nick Rahaim's very engaging Chronicle article: "The competing legends of Monterey Jack."

Morganti, a longtime member of the Pacifica Historical Society (PHS), pointed out there was a Swiss-size hole in the carefully crafted story. The feature investigates the multi-layered, California storied past of this "semisoft white cheese," where the legends of its origins travel such diverse milky roads as Spain, Mexico, Portugal and even Ancient Rome. At least one of these roads leads to (19th century) Monterey Peninsula landowner David Jacks, a.k.a. David Jack, so unpopular with the locals of his time because of his land theft but-no-clearly-broken-law tactics, that many Montereyans thought a noose would be too good for him. He traveled with bodyguards.

But this is the part of the Chronicle story that had many Pacificans shouting "How Dairy!" for there was no mention of the cheese-lined trail that led straight from a Pacifica fromager into the kitchen of David Jacks. Here's that tale, sliced from my own many pennings on this proud Pacifica matter.

In 2015, Pacifican Kathleen Manning, owner of Manning's Prints Old & Rare and then president of the PHS, came across a first edition, 1937, of "Eating Around San Francisco" by Ruth Thompson and Chef Louis Hanges. The book features local "best" eateries, some still familiar today such as the Palace Hotel, the Beach Chalet and Fisherman's Grotto. Others are favorites now gone and they include: Mission Dolores Grill, Frank's Place at Moss Beach and Ray Mori's Place at Mori's Point, located in today's Pacifica. It is at the latter locale where Pacifica Jack was not only created but stolen.

The authors write: "In a rambling, old-fashioned but comfortable 21-room farmhouse, high over the cliffs brooding over the waters of the Pacific, just 11 miles south of San Francisco, Ray Mori and his wife, Marie, live on 10 of the original 19 acres which Stefano Mori bought on his arrival from Italy in 1888."

Thompson and Hanges go on to note all the assets of the country-style hotel and restaurant, such as: the wooden back porch that leads into the bar; the kitchen brimming with the aromas of "cooking sauces, soups and meats;" the beautiful storeroom filled with cheeses and "salami hung from the ceiling."

But it is on page 285 where readers discover the Pacifica Jack cheese evidentiary paragraph.

"Returning to the bar room to talk with the Mori's before dinner was served," one of the author's writes, "I was interested to discover that it was Stefano Mori who first made what we today call Monterey cheese. Having been born and brought up in Italy, Stefano and his wife learned how to make cheese. They made it on their Mori Point property, getting their rennet from the stomach of a freshly killed calf. The cheese was very good. An Italian named Baldocchi was a friend of the family. He learned how to make the cheese and went to Monterey and manufactured it on a commercial scale. As he was on the Jack Ranch (owned by notorious scoundrel David Jacks), the cheese is now known as Jack or Monterey Cheese."

The ever-resourceful Manning also found Stefano Mori's original recipe and since 2015, Pacifica Jack has been made for the PHS by a professional cheesemaker. It sells for $8 a pound and is available at the Pacifica Coastside Museum. To date, almost two tons have been sold.

Shortly after the Rahaim story ran, Manning wrote him a letter explaining the local meltdown. She asked him to consider joining the officiating judges at this year's 4th Annual Pacifica Jack Cheese Contest, just two weeks away. As of the date of this writing, silence. As for the rest of us – let's show the world what makes Pacifica grate.

Note: This article was originally written in March of 2019. The Annual Pacifica Jack Cheese Contest takes place annually in the month of April. Due to Covid-19, the contest was canceled in 2020 and is to be determined for 2021.