California’s greatest treasures are the small coastal towns that dot the Pacific Ocean and the Bay Area community of Pacifica is home to the state’s greatest hiking trails.

Located only 20 minutes south of San Francisco, Pacifica is part of one of the world’s largest urban national parks, the Golden Gate National Recreation Area (GGNRA), which hugs the California coastline for nearly 60 miles. And, approximately 17 million people are drawn specifically to the town of Pacifica each year to enjoy the unparalleled recreational options, stunning natural beauty and riveting history.

So, pull out your hiking gear and let’s get going.

We’ll start at Mori Point, which has something for everyone…with trails that accommodate novice strollers to active hikers. 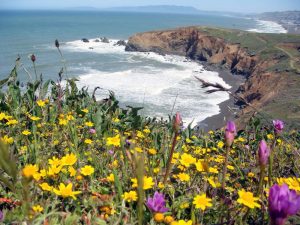 For nearly a century, Mori Point served as a haven for settlers, travelers, bootleggers and diners. Today, this spectacular locale serves as a haven for walkers and wildlife. A recent addition to the GGNRA, Mori Point is considered the natural coastal extension of the National Park’s Sweeney Ridge area, located due east across Highway One.

Visitors can stroll along paths through wildflower fields, visit restored habitat for threatened species and enjoy views from the upper trail.

From the coastal blufftop, hikers marvel at the dramatic coastline, stretching north beyond Pacifica to the Marin Headlands and, on a clear day, Point Reyes. To the south, you’ll be surprised and entranced by the sudden view of the beautiful but inaccessible hidden cove, and beyond, the Rockaway and Pedro Point Headlands. Also visible is the Pacifica Pier, Sharp Park Beach, the Sharp Park Golf Course and the earthen berm supporting the Coastal Trail and separating the beach from the Laguna Salada freshwater marsh.

Benches are available for sitting and enjoying the vista. The top of the point is a great location for whale watching and breathtaking sunsets.

Next, we’ll segue to Sweeney Ridge, which is rich in history and full of intriguing surprises along the way. 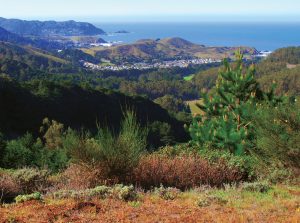 In 1769, a scouting party led by Gaspar de Portola became the first Europeans to see San Francisco Bay from the ridge top of Sweeney Ridge in which a monument marks the momentous occasion.

Sweeney Ridge is a federally protected hiking area of ridges and ravines between San Bruno and Pacifica where steep and rolling coastal hills overlook the San Francisco Peninsula, San Andreas Lake and the Pacific Ocean.

The ridge’s 1,200-foot-high summit, covered with coastal scrub and grassland, slopes down to the bay on one side and to the Pacific on the other. Wildlife includes hawks, deer and a plethora of spring wildflowers.

On a clear day, you can see the City of Pacifica and the shimmering Pacific Ocean and coastline. In the springtime, the hills turn gold with California poppies and other wildflowers.

For our next adventure, we head to Milagra Ridge, which features a robust wildlife habitat and curious military history. 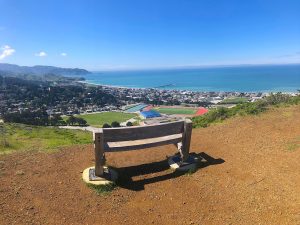 Milagra Ridge’s scrub-covered ridgeline runs east to west, offering impressive views of the cliffside city of Pacifica, the ocean and the coastline. This protected ridge is the focus of community efforts to restore the wildlife habitat and to help ensure the survival of rare and endangered species found within this national parkland. The ridge is a critical habitat for the endangered mission blue butterfly and home to Redtailed Hawks, often seen spiraling overhead.

The historical, 330-acre Milagra Ridge Military Reservation was acquired in 1942 during World War II for use as a coastal defense installation. Two coastal batteries were planned. Battery 244 was started in 1942, but not completed until after the war in 1947 and Battery 130 was never built. Battery 244 was decommissioned in 1950, then the reservation was used by the U.S. Army Defense Command for anti-aircraft missile Nike Site, SF-51, during the Cold War. The reservation was finally closed in 1972 and portions transferred to the City of Pacifica in 1974. 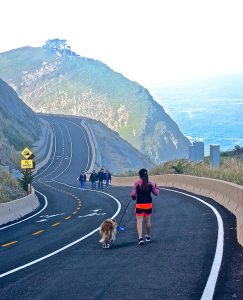 We’ll conclude our suggestion of journeys with Devil’s Slide, which is so named due to its steep, rocky coastal promontory located about midway between Montara and the Linda Mar District of Pacifica.

This is a 1.3-mile, multi-use trail, converted from a former segment of Highway 1, giving hikers, runners, bicyclists and equestrians access to the rocky heights of Devil’s Slide above the Pacific Ocean.

There are benches for resting and observation scopes for taking in the view of the rocky coastal waters below. At key points along the trail, there are interpretive signs that describe the history, geography and marine and avian communities that live and migrate here.

The trail is paved, with separate lanes for hikers and directional bike traffic. Many convenient amenities are provided as well, such as pet waste stations, bike racks, drinking fountains and restrooms. Devil’s Slide Trail is a segment of the California Coastal Trail that, when finished, will extend 1,200 miles from Oregon to Mexico, connecting travelers to California’s varied oceanside landscapes.

For more details and online access to these and other Pacifica hiking trails, please visit AllTrails.